A Brief History of Santa Claus 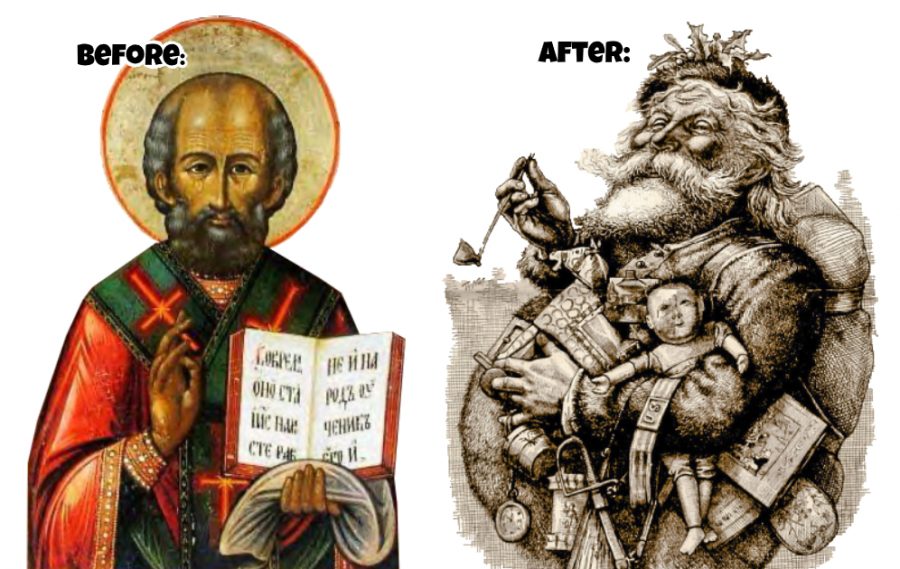 Over the years, the story of the third century's Saint Nicholas of Myra (left), has evolved into the more familiar image of the gift-toting, big-bellied Santa Claus (right).

Most children grow up hearing the popular lines, “He sees you when you’re sleeping, he knows when you’re awake, he knows if you’ve been bad or not,” and our parents rebuking our bad behavior by saying, “If you aren’t good you will be put on Santa’s naughty list.” But where did today’s version of Santa Claus come from?

Santa wasn’t always a large-bellied, white-bearded man hauling around presents and riding a sleigh pulled by flying reindeer. In fact, Santa Claus was a real person: the Catholic saint, St. Nicholas of Myra, who lived in the third and fourth centuries.

Bishop Nicholas of Myra is recognized by the Catholic Church as the Saint of Children. Bestowed a large inheritance by his parents,”Saint Nick” chose to devote his life to God, to help the poor, and to and secretly give gifts to those in need.

One legend of Saint Nick that most relates to the version of Santa today is the story of a poor man and his three daughters. The man so poor that he could not pay for his daughter’s dowry for marriage. Nicholas of Myra heard of this and one night dropped a bag of gold down the poor man’s chimney right into a stocking that hung by the fire. Saint Nicholas begged the poor man not to tell anyone of this kind act, not wanting attention drawn to him, but the poor man did so anyway and from that point on, anyone who received a mysterious gift assumed it must be from Saint Nick.

After the Reformation in the 16th century, anything universally related to Catholicism was unpopular, and Saint Nick and his good deeds faded away as new fictional gift-givers — “Father Christmas in the UK” and “Père Nöel” in France — replaced him.

But the name we know today — Santa Claus — came from the Dutch who settled in America in the 1800’s. They brought with them the old stories of Saint Nick, calling him,“Sinterklaas,” which evolved, over the years, to Santa Claus.

In the Victorian era, Saint Nick found new popularity in the well-known 1823 poem “Twas the Night Before Christmas”  by Clement Clarke Moore. In the poem, St. Nick is described with eight reindeer (which eventually became the inspiration for “Rudolf the Rednosed Reindeer”).

Another detail that’s often overlooked is the color of Santa’s suit. Since St. Nicholas of Myra was a Bishop, his robes were always red. This detail was forgotten until an 1880’s illustration of Santa Claus by Thomas Nast that is still the most popular version of Santa to this day.

Today’s version of Santa started from a kind man giving his life to serve others and was slowly changed by history into the jolly, big-bellied man that we know today. The story of how Santa came to be provides the real lesson behind the Christmas season, that kindness and generosity towards others doesn’t just have to come from a fictional character.