A Dark Day on Capitol Hill 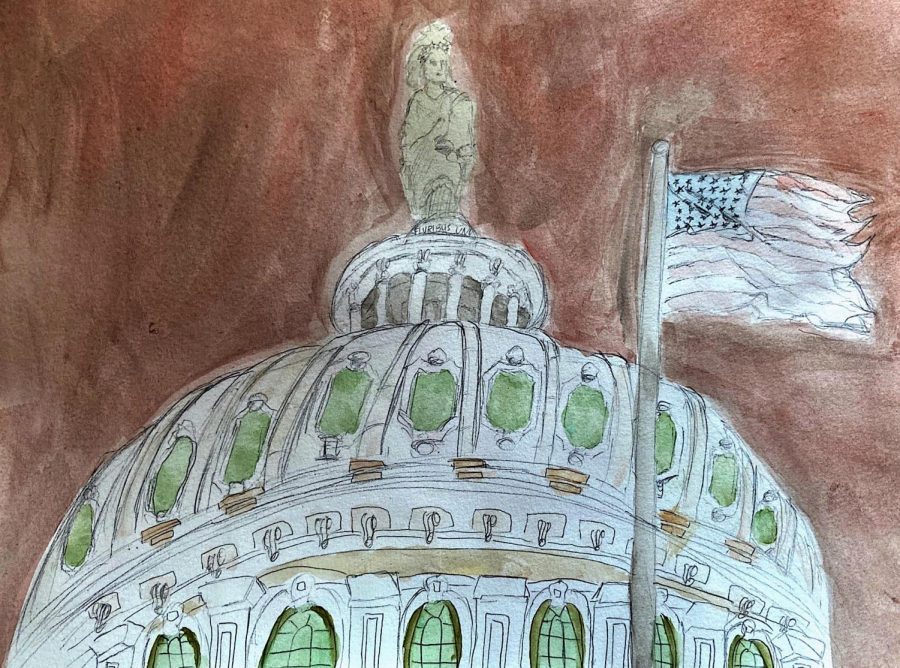 Wednesday's assault on the Capitol building by protestors of the certification of Joe Biden's impending presidency was not only a low point in current president Donald Trump's tenure, but a low point in American history.

On Wednesday morning the world watched as hundreds of pro-Trump supporters stormed Washington D.C.’s revered Capitol building and smashed windows, broke into the House Chamber, and terrorized our nation’s leaders. Democracy was under attack by domestic terrorists, an attack instigated by our country’s very own Commander-in-Chief, Donald Trump.

The U.S. Senate and Vice President Mike Pence had gathered to certify the Electoral College votes which would confirm Joseph Biden as the nation’s 46th president. But on the morning of Jan. 6, certification day, Trump gave a speech to throngs of supporters, repeating his claims that the November election was rigged. Emboldened by the president’s words, the crowd marched to Capitol Hill.

What ensued was an assault on one of the country’s most iconic buildings.

The siege on Capitol Hill was not a peaceful protest or an expression of First Amendment rights, it was an act of domestic terrorism. The United States Code defines domestic terrorism as “activities that involve acts dangerous to human life that are a violation of the criminal laws of the United States or of any State; appear to be intended to influence the policy of a government by intimidation or coercion.” The actions by Trump’s supporters that morning were the very definition of terrorism as they pummeled police and planted bombs.

The images that filled our social media timelines were some of the darkest in American history. The Senate and the House were held hostage by zip-tie- and gun-wielding thugs; rioters forced their way past out-numbered police; seditionists vandalized, ransacked, and looted offices; extremists smashed windows; and a small mob scaled scaffolding to replace an American flag atop the building with a Trump 2020 banner. During the assault, four extremists and one police officer died.

This horrifying display of looting, murder, the desecration of the flag, and vandalism cemented that these terrorists were not fighting for the good of America, but rather to promote Trump and his democracy-destroying ideologies.

This is not the first time Trump has encouraged chaos. During the 2020 presidential debates Trump told the Proud Boys, a white supremacist group, to “stand back and stand by,” seemingly priming them for this very moment.

Further fueling the chaos was the inaction of the Capitol police force. Police, their ranks shockingly thin, were overwhelmed and unprepared for Trump’s angry mob, an ironic contrast to the massive police and National Guard presence that met last summer’s Black Lives Matter protests. Instead of being pelted with rubber bullets and tear gas, Trump’s supporters managed selfies with police officers (some of whom even appeared complicit in the raid).

Trump seemed unfazed by the destruction he incited. During the violence that was occurring just a couple of miles from his location at the White House, Trump posted a video on Twitter stating, “It was a landslide election and everyone knows it, especially the other side, but you have to go home now.” But instead of dispersing, the mayhem commenced.

The people responsible for the fear and desecration of the Capitol — namely Donald Trump –need to be prosecuted to the fullest extent of the law. Trump should no longer be able to evade justice and should be impeached for inciting a mob of terrorists who heeded their leader’s call and attacked the Capitol.

The beauty of democracy is the citizens’ participation in choosing whom we want to represent our country. America was founded on these principles and to go against the very system that gives us a voice is despicable.