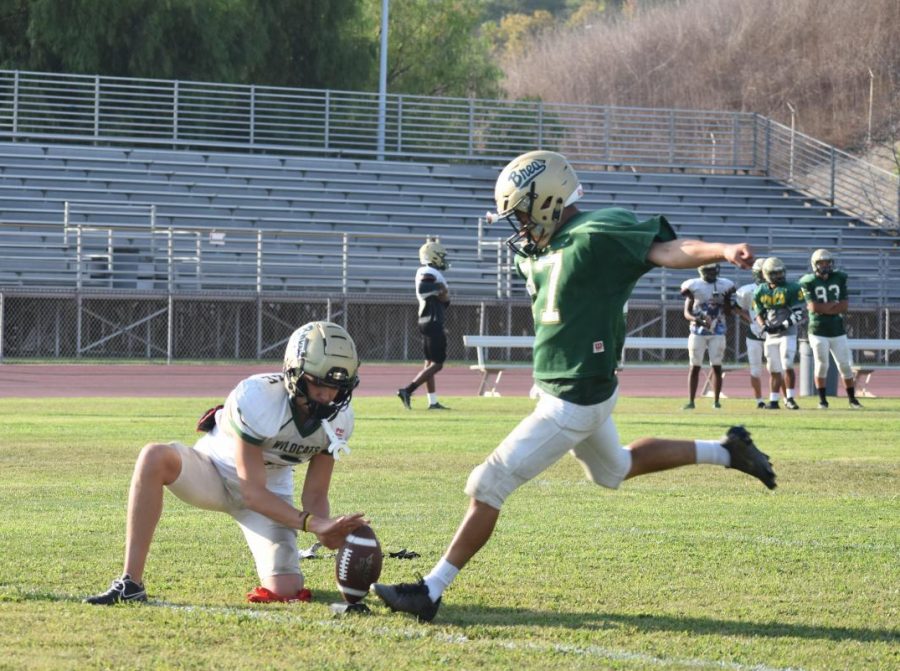 Axl Rodriguez, junior, holds the ball as Isaiah Garcia, senior, prepares to kick at practice on Sept. 8. The Wildcats are preparing for their Friday evening showdown against Sunny Hills High School at Wildcat Stadium.

With a 40-14 dismantling of Valencia High School in the varsity season opener on Sept. 3, Wildcats football picked up right where it left off at the end of the 2020-2021 season when they were crowned North Hills League champions.

The team will carry its momentum into tomorrow’s contest home against Sunny Hills High School.

The Sept. 3 game at Valencia was essentially over by halftime as the Wildcats built a 34-7 lead over the Tigers.

Senior quarterback Justus Thongprahchanh accounted for three touchdowns and 331 of the Wildcats’ 427 total yards — 288 yards in the air, including a 61-yard TD pass to Ryan Reagins, senior, and 43 yards on the ground on five carries.

During the game, Thongprahchanh connected with six receivers — Wes Nelson, senior, led the team with 77 yards on four receptions, including a touchdown; and Roman Meraz, junior, hauled in four passes for 75 yards and a score.

Meraz, was satisfied with the win, but acknowledged that there’s room for improvement, “[The fast start] did help the confidence, but we need to finish strong too, and not let off the gas till the clock hits zero,” Meraz said.

“Our team is definitely feeling happy and we have some confidence now,” Aidan Arnold, senior, said. “But we can’t let it get to our heads because we have a tough opponent ahead of us.”

That “tough opponent” is Sunny Hills High School, who will make the short drive from Fullerton to Wildcat Stadium tomorrow evening.

The number 21 ranked Lancers enter the game at 2-1, and are coming off a 17-15 win over El Modena High School on Sept. 3. For the Wildcats to prevail, they will need to stifle Sunny Hills’ running game, and its junior running back, David Mahood, who is averaging 154 yards per game on 74 carries. As a team, the Lancers are averaging 222.3 yards per game on the ground.

“We [have] a much tougher opponent this week so we really gotta be on our ‘A’ game,” Meraz said.

Thongphrachanh  is energized for the Wildcats’ first home game of the season. “We tend to play a little bit better at home,” he said. “And the crowd and The Den is probably going to excite us and make us play better.”

Meraz concurred: “It’s our first game where we can have a full student audience in over a year and everyone on the team is excited and ready to put on a show.”